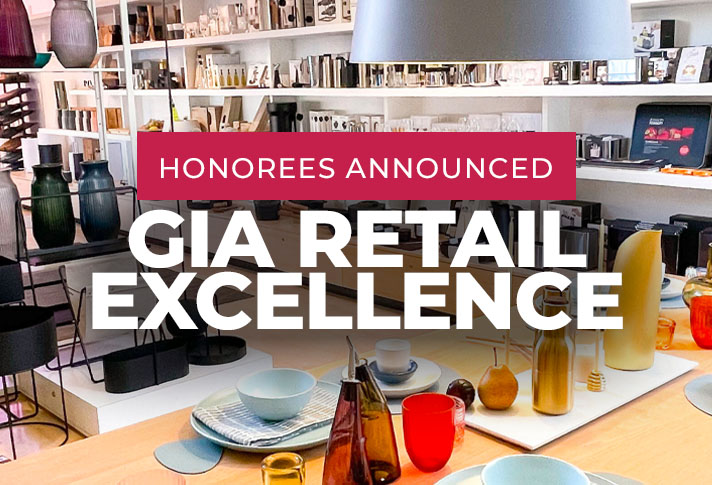 The Inspired Home Show and the International Housewares Association (IHA), the global sponsors and organizers of the IHA Global Innovation Awards (gia) program, today announced the 2022 gia Global Honorees for Retail Excellence. The Global Honorees are:

The global gia jury, consisting of four retail/visual merchandising experts and seven editors and publishers of co-sponsoring housewares trade publications from around the world, selected the gia Global Honorees from the winners previously chosen in their respective countries by the national gia sponsors. In addition, the Martin M. Pegler Award for Excellence in Visual Merchandising was awarded to HomeTown – by Praxis Home Retail Limited of India and the gia Digital Commerce Award for Excellence in Online Retailing was awarded to MAKE Designed Objects of Australia.

In addition to the 2022 Global Honorees, the 2020 gia Retail Global Honorees and the 2021 gia Top Window award winners were honored at the livestreamed gia awards dinner that took place at Radisson Blu in Chicago last night.

world. Since the launch of gia in 2000, there have been close to 500 gia retail award winners, from 50 countries on six continents.

The competition is structured on a two-tier level, national and global, evaluating retailers within the following categories:

Co-sponsoring the country-specific gia award programs with IHA are housewares trade publications worldwide, which sponsor national gia programs in their respective countries. This year, a record number of 33 national gia winners from 32 countries were selected by the co-sponsoring trade publications with targeted distribution in over 50 countries on five continents. All winners were automatically entered in the global competition for The Inspired Home Show in Chicago.

The gia winners of 2021-2022 are recognized and prominently featured at The Inspired Home Show. A festive gia awards dinner was held at the Radisson Blu Aqua Hotel. In addition, introducing the national gia winners to visitors and exhibitors of The Inspired Home Show, there is a special gia display in the walkway connecting the Lakeside Center to the Grand Concourse. Both gia national winners and Global Honorees are also recognized in a gallery.

Plan Your Show Today
Get Started